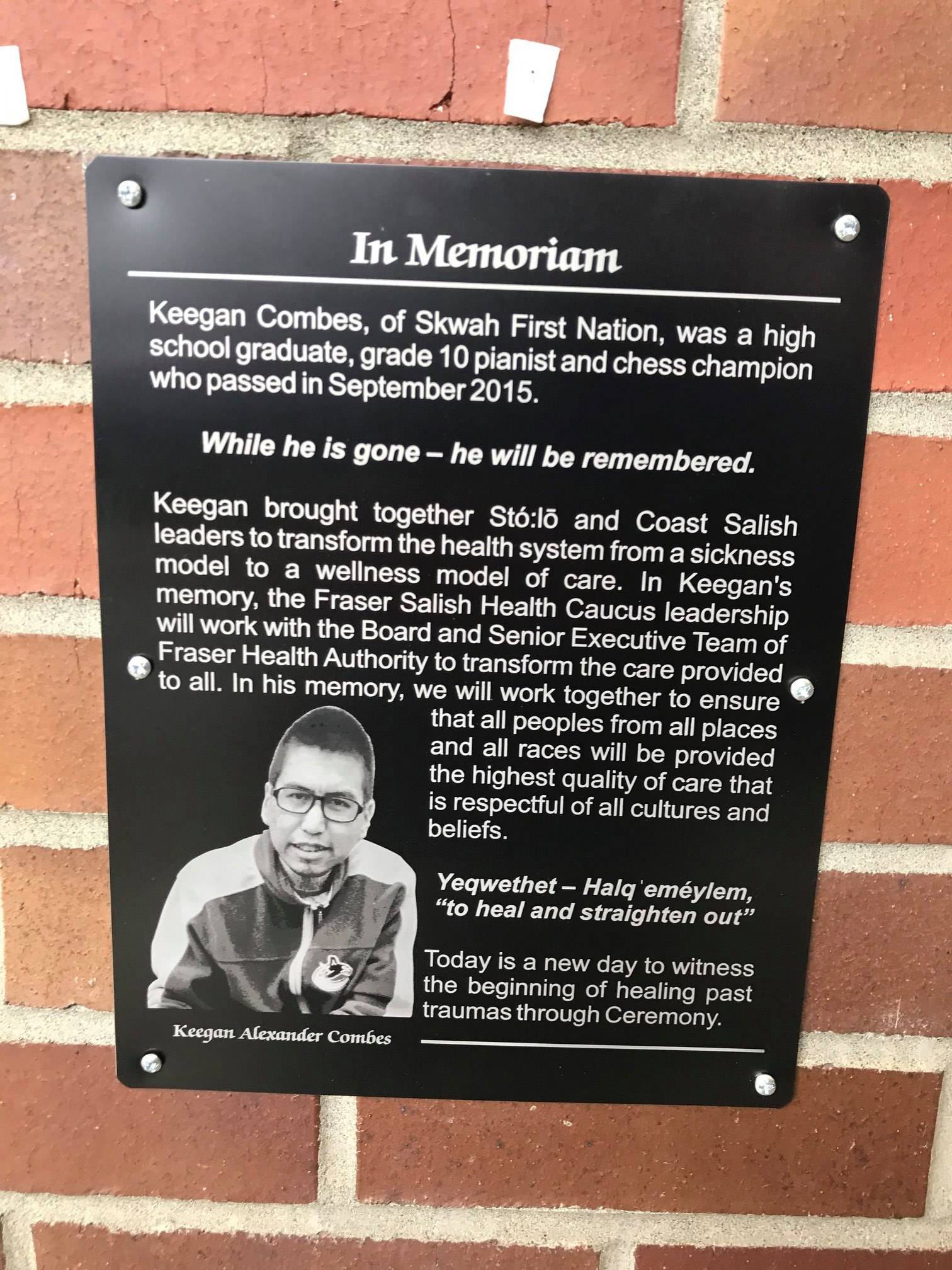 February 21st would have been Keegan Combe’s birthday. He passed away in September 2015, after an accidental poisoning and a delayed response from the health care system treating him. Keegan, from Skwah First Nation, was an accomplished pianist and chess player. He was registered in trades school and had just completed his first day of classes.

At the time, Keegan was receiving HomeShare and Outreach support through CSCL and lived with his caregiver Rhianna Millman, and her partner Paul.

This past February 21st , the First Nations Health Authority (FNHA) released a document titled “Remembering Keegan: a BC First Nations Case Study Reflection”. This was done on his birthday as ‘an ongoing gift from Keegan to leaders in the healthcare system, so that they could help to take action and educate others to create a system that is fair for all.’

This followed a ceremony in September 2019, on the four year anniversary of Keegan’s passing, where a plaque was unveiled to honour his legacy as someone who ‘brought together Stólō and Coast Salish leaders to transform the health system from a sickness model to a wellness model of care.’

The document outlined Keegan’s treatment during his hospitalization, which played a large role in his death, noting that there were many assumptions made about Keegan that were based both on him being an indigenous person and a person living with a disability.

The case study reflection noted the ‘deeply held Canadian value to treat everyone equally, regardless of race, ability, gender, sexual orientation or other markers of identity.’ This right is echoed in the Self Advocates Bill of Rights, which states, ‘Everyone has the right to good medical care.’

The document concluded that Keegan’s death was a result of a ‘series of culturally unsafe and harmful encounters’ while in hospital.

Keegan’s caregiver recognized the need for advocacy, both while he was in hospital and in the time following. Rhianna was entrusted by Keegan’s family to advocate on their behalf for change and played a large role in calling attention to his story.

Rhianna states, “Keegan is a transformer stone here in Fraser Salish. His story needed to be shared and I promised him before we let him go that I would make sure people knew exactly who he was and how incredible he was.”

The case study reflection outlines the importance of local First Nations transformer stories, which are rooted in correction and sacrifice. In Keegan’s story, he is a generous person who is transformed to be a valuable resource.

“We elevate his story, as he has been transformed into someone who speaks not only for the marginalized, invisible and unheard, but for all the rest of us.”

Further to Keegan’s legacy of helping transform what health care looks like in BC, a scholarship and two bursaries were created in Keegan’s honour, dedicated to supporting other First Nations students as they begin the same learning journey as Keegan.

Keegan’s entire story can be found on the First Nations Health Authority website.